Zimbabwe…hmm….well it started with the border crossing which was by far the most confusing and convoluted one I had yet to venture through. Luckily South Africa 4×4 has an agent there to help. If it weren’t for Emmanuel I’d probably still be there filling out forms. And then there is the matter of being Canadian. Usually that affords a little kindness from every other country, but not Zim. Zim penalizes you for being Canadian, not sure why. So basically double the cost for Visa’s and most park fees. And it’s all US dollars so let the monetary exsanguination begin!

Victoria Falls was nice, I have not been on the Zimbabwe side before. Somehow didn’t seem as grand as from the Zambian side but the last time I saw it, it was rainy season.

At the rest camp I met Nikita and Vincent. A young couple doing the same sort of trip as me but they are already 6 months in. Nikita and I ventured for a little souvenir browsing and ended up having fried Mopani worms and warthog croquets for brunch. I preferred the worms myself, the warthog tasted like they smell. Protein is protein, a little hot sauce always helps, lol! Hopefully we will meet up again north of here. 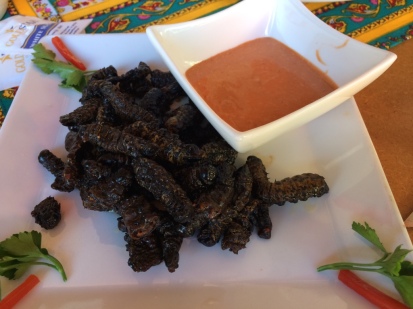 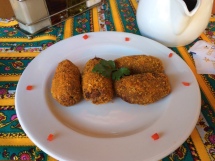 Hwange National Park was the first stop after the falls and the numerous police stops. If the last 4 didn’t find a reason to give you a ticket well maybe this one will. The new rear light seems to have been wired incorrectly, as the 5th police women told me. She was so close to giving me a ticket but I managed to talk my way out of that and the fact that my fire extinguisher is too full, really?! Once at Hwange, the first camp overlooked the valley below. A nice herd of elephants slowly made their way across. Not a bad place for the night. I attempted to figure out the problem with the light. As luck would have it the camp was full of engineers. They took the light on as a challenge and pretty soon disassembled, re-wired, and soldered it back together better than before.

Hwange had much to see, alas no cats, again. I did come close apparently as one of the research assistants told me. I was a stones throw from a pride of 11 lions, he saw me drive carefully by. I wasn’t sure if I could go onto the airstrip where the tracks lead and I couldn’t see the team nor the pride. D’oh! Birds and other herbivores it is.

Chizarira NP is next then off to Kariba. I had originally planned to go to Matsudona NP but a friend, Will of Will of Africa, strongly recommended not going as he has lost 1 or 2 specialty tires on that road and for one night he did not think it was worth it. He hasn’t lead me astray so far and his wife is from Zimbabwe so I will heed their advice.

Chizarira is beautiful but getting there is anything but. To call the only way in and out a road is exaggerating. It’s more a collection of suggested pathways that converge in a like direction. Between sand, to straight bolder climbing and old paved portions you come to a gate. Which is locked. Really!!! There is no speedy getaway here. I signed in and noticed I’m it. I’ve been the only camper before but not the only person in a whole national park before. Apart from the rangers I was the only visitor for the past few days. Hmm.

The campsite is basic, way over priced but that’s a Zim thing. The camp over looks the Mucheni Gorge of the Chizaria Mountains. Down below is a small pool of water, or what’s left of a river. The noises echo throughout the gorge as the occasional trumpeting elephant reverberates to the campsite above. I was starting to wonder why on earth I scaled that road, and will have to do so again, when they appeared. A small herd of elephants, 6 with one little one. Surely they aren’t going to climb down the mountain side just for that small pool of water?! They began their precarious journey down slowly, cautiously. Amazing! That’s why I’m here. The sun was starting to set and I was eagerly watching and silently cheering them on. I was desperate to see them reach the water before the sunset. I trip over my own feet in broad daylight, in the dark on a cliff face probably not the best place for me. They finally reached the water, passed it right by. Totally confused and unsure whether to stay or go, I watched on. They tried to climb the other side, my side of the gorge. It was far too steep and they turned about, stopped for a quick sip and set off down the bottom of the gorge to find a better way out. Dusk was fast approaching and being stuck in a gorge at night is not place for man or beast. Hope they made it.

The following morning I repeated the same “road” back down. I arrived at Warthogs in Kariba on the lake and settled in for the night. Couple Savannahs later and all was right with the world. I was chuffed I made it out in one piece, down that road, and without much ado. An entire large bottle of dish detergent had exploded in the back of the bakkie! Explains that nice scent I picked up about 30 minutes from Kariba. Could be worse, at least it’s clean.

The morning held more surprises and I didn’t fair as unscathed as I had thought. The morning checks revealed a torn CV boot. The manager directed me to the only repair shop in town. Kevin, cheers pal you are a prince, quickly assessed the problem and felt 30 min and you’ll be on your way. We’ll just adjust the remainder and you’ll be good to go. That is until he hears I’m headed to Mana Pools. Full stop. Nope, can’t do it, those roads will destroy what ever temporary measure he tries. So there goes my first day in Mana Pools and add another day in Kariba on the Lake. Can’t complain the view was great and he managed to get the part from Harare despite the strikes. Fixed and off a day late but safely.  He did let me watch as he dismantled the drive shaft to get this rubber cover on. The Mana roads were fine. The corrugations I was warned of had been grated and not much trouble. On a scale of nothing to Epupa Falls it was a 2.

Elephants, the whole reason I am in Mana Pools. It’s one of the few places large bulls will rear up on their hind legs and reach up with their trunks to strip the good leaves off the trees. After finding my campsite, or rather left side of the tree (not the right as I had parked), I headed out. Within minutes they were up and eating leaves. It is a sight to behold. These behemoths up on their hind legs. Just wow! I watched in awe. Sorry guys didn’t get a picture. I just enjoyed gobsmacked at the feat before me. I figured I’d see it again, should have known uncle murphy was in town.

Not to fear I managed to get a repeat performance, sort of, the next day. Although he wasn’t quite as committed to the cause. Only up on one but still it’s pretty amazing.

Almost forgot, the Canadians! In the middle of camp I spot a vehicle with a Canadian Flag waving proudly in the window. I stop them quickly and learn they are from Red Deer. One family is from Lacombe and the other Wetaskiwin, the remainder from SA. Small world indeed. That evening I joined them and their large family/friend group of 29 for dinner and frivolity as well as an impromptu ear-piercing of one of the ladies. Between the multiple nurses and physicians, I think we had it covered but it went smoothly. Wonderful group, safe journey until you all come together again in 2 years. Liné has my info. Thanks!

And as I left after two days of fun in Mana Pools I was rewarded for slowly ambling on my way. On the road in front was a figure. A spotted figure. Wait is that, can’t be, really just like that after looking for 2 months. Yup, a gorgeous, can’t believe you are crossing the road in front of me, leopard. I came to a stop and he hid behind a wee little scrub bush. This is when logic and the inner photographer have a go. The logical part of me says, snap a picture before he runs off, at least you’ll have a photo. The pseudo-photographer goes just inch your way up slowly you’ll have a perfect shot. There you have it, a common predicament, I often lose the shot altogether. But maybe just this once. I inched my way up slowly and he took off. Blast!!! Quickly snap a few parting shots. And as quickly as he darted he stopped and turned around, eyed me up for  moment and sauntered on his way only to pause once more to ponder his route. Yay! Ladies and gentleman we have leopard! Mana Pools, thank  you, so coming back.

Zambia you’re up. Lusaka for a couple days to get supplies and well shower.