Marangu was as wonderful as the previously with the added bonus of a home cooked meal. Jackie had invited me to her home for a home cooked meal as she had cooked her sons favourite meals before heading off to Cambridge. After good food and company and I was ready to set out for Dar Es Salaam and Zanzibar. Well to be accurate Zanzibar is the collection of both islands (Unguja and Pemba).

Ok, I’ve thought long and hard about the road to Dar, and I still can’t stand Dar. Why? Well you’ll find out soon enough. I made great time until about 40 km outside Dar. That’s when my first ever, not first on this continent, but first ever speeding ticket occurred. And it was bogus to boot. Tanzania is known for its speeding ticket scams and I was the latest victim. There is no way on this planet I was going the speed their whatsapp photoshopped picture of Springbok with a speed reading showed. The truckers and buses are too crazy for me to ever go that speed. But I have no leg to stand on to argue the validity of their proof. I begrudgingly coughed up the fee. This was my introduction and it did not get any better. Just meters from the Toyota Service station my tire was stabbed. Great. Then the hotel I stayed that had great reviews on TripAdvisor was anything but. Moving on. Ferry ride was great and Unguja was amazing.

I stayed at Dolphin Safari Lodge in Kizimikaze. There are a bunch of things to do on the island. And Patric can help you arrange them all. Stone Town Tour, Spice tour, swim with the Dolphins or a spectacular trip into the mangroves in a dug out canoe and sleep in a bush camp after waiting for the Greater Bushbabies to come and snack on bananas. Or see the Red Colobus, that live only on Zanzibar, in Jozani Forest. Or you can do what I did and impersonate the flora and be a beach bum. I sat in the tide going out, played in the water coming in. Stepped on urchins, not willingly mind you just a small price to pay for wondering the ocean floor during low tide. I sat on hammocks and chairs and just took it all in. Food was amazing and Patric is a great host. I had the pleasure of meeting Henri a professional photographer from Germany and his lovely wife as well as Christof and his wife. Also, Jon, Patrics’ son who was visiting for the first time. And the amazing staff including Anise and Ali. Family style dinners with this group were an absolute pleasure and conversation endless. A great way to relax and replenish the battery for the trip to come. I had intended to do all the things but doing nothing won me over. Wasn’t much of an argument, lol! 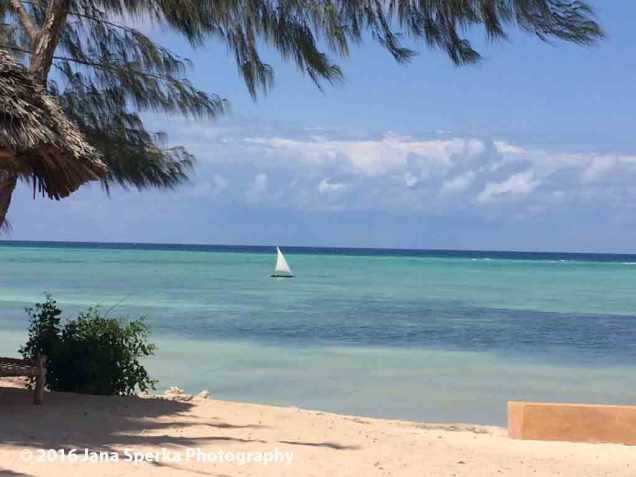 Recharged and ready to get Springbok back from the service center I took the ferry back over 3 days later. Far too short of a time in this amazing place. A re-do is in order :).

So, Dar Es Salaam or as I know refer to it Dar Es Slammed did just that. I’m not exactly sure what the service centre did but I’ve had nothing but problems since. Strike #2. Then, the service center is 2.2 km from my new hotel. No way I was staying in the last place. That 2.2 km was the longest I’ve had. First another police officer decided I had done something illegal. I didn’t, and he gives me a ridiculously high fee. Fine, I asked for a receipt and the price drops. That’s the ultimate sign this is bogus but I was running late so I coughed up the much smaller amount. Jerk! The traffic was horrid and it took close to an hour to make that short drive. The hotel was wonderful and with a happy surprise.

Although I thought Ngorongoro would be my last dynamic duo gathering they were in Dar early. Yay! One more go round. And just what I needed, good friends, lots of alcohol and retail therapy. All provided by Nikita and Vincent. Eternally grateful to them both. We hopped into the bujaje or however it’s spelt. The Dar version of a Tuk-tuk and off to the peninsula for good food. I left early in the morning and escaped Dar without additional tickets and made my way to Morogoro before going to The Selous. I had all intention to go into Morogoro NP but I was not feeling well and sat around for a day. The road to the Selous that I had planned to take doesn’t actually exist. So I had to backtrack to almost Dar and head south. The disappearing road is a recurring theme, lol!

The Selous Game Reserve was fantastic, it cost me a driver side mirror. The road went well until the last 62 km when the road gets so narrow and overcrowded with thick bush I didn’t see the branch or dead tree until it had taken my driver side mirror. When I arrived at the camp the other 3 self drive vehicles also lost their mirrors. I felt better, misery likes company. The local mechanic bolted the mirror back into place so it didn’t dangle and when I returned to Morogoro I found an insert and we were back in business or good enough to avoid more tickets.

I had arranged to have two game drives in the Selous. And no I was not planning on self driving for once. I wanted to enjoy being driven around. But a young French couple who had spent the past month in Tanzania and this would be their only safari opportunity needed me. Literally. Because I was to have a solo game drive, no one else was doing a drive as the other self drives were there to fish, I would have to pay a solo fee. Ecks! The French couple had arranged a full day boat trip and were in the same situation. Except their price doubles in cost. After much discussion with the manager Jimmy,  we arranged for me to join them for the same price I would have had to pay regardless and they get to pay the lower price. Everyone happy. Boat trip means birds so you know I was extra happy.

The boat trip was wonderful. The river was deceptively shallow and we did get sand barged briefly. The birds, hippos and crocs were everywhere. No elephants, oddly. The cloudy windy weather may have had a role to play for the lack of elephants.

The game drive started out rough but it was just as wonderful as the boat trip. Our driver tried to get close to the Hippos for the Danish couple who had joined me for the game drive. This was their third day in Africa and first ever Safari Drive. Well we got marred in the mud and almost tipped in. After trying to dig us out and trying to use the winch which was submerged another car had to come and pull us out. The driver and I were in the water trying to get us out and the couple were on Crocodile and Hippo watch. Few cuts and scraps but we were on our way. Well, a pee break first, which of course was witnessed by a game drive vehicle driving by. It was the only secluded spot….or so I thought.  Come on, really! Oh well.

We spent a fun time with playful Savannah Baboons. Even a game of ring-around-the-rosy before heading off.

We had started the morning with 6 lions scattered around the base of various trees for shade. 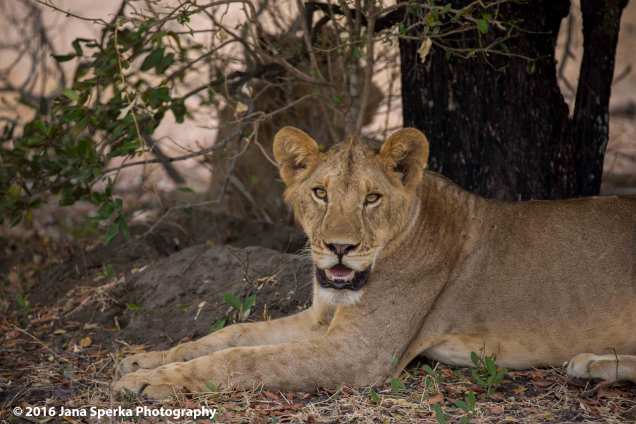 Then I spotted some vultures off in the distance circling. The Safari guide was busy driving and had not spotted them. The roof does make it a little harder to spot things. After pointing them out he agreed to follow them. Thank goodness. We found dozens of vultures all around the area. Then the smell of death, a dead Cape Buffalo in the brush with huge crocs that had just scurried as we came. They had feasted on its face. But where are the lions responsible for this? A few meters away we found them on another kill, a rather fresh one. A nice male, 2 females and 2 cubs of different ages. The girl was the younger of the too and way more daring than older brother/cousin. We stayed here being the only vehicle for at least an hour before heading back to camp slowly. 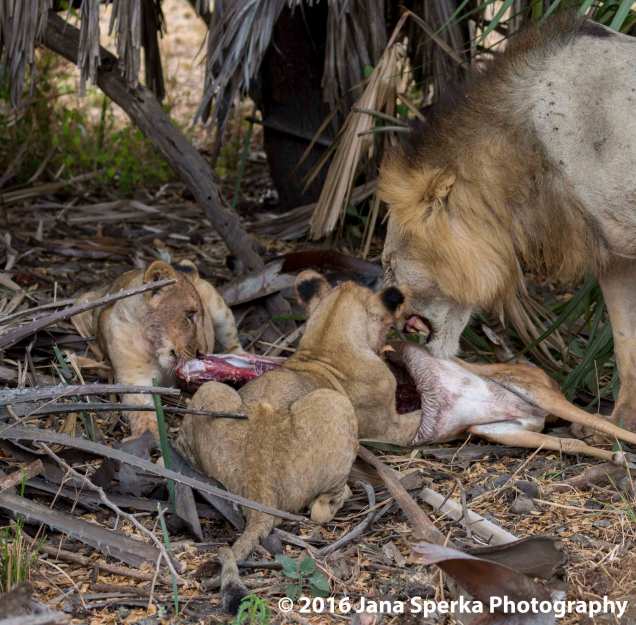 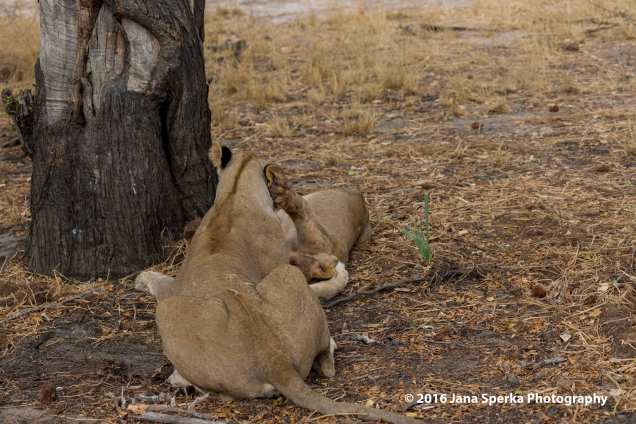 And that was it, another wonderful experience. Worried for the remaining side-mirror I paid, again ridiculous, transit fee to go through the park. But the rains started. The normally easy-going dirt road back to Morogoro turned into thick and deep mud. Nothing Springbok can’t handle but the other cars and buses became dangerous as they slipped and slid all over. I would’ve loved to help them out but stopping in that muddy mess would have ended the trip so we slowly plugged along. Dirty but we made it. Now to head for the border. Ruaha was the plan originally but with funds near depleted and Springbok starting to limp from his service in Dar I opted out. Quick stay at The Old Farmhouse with the best food I have had to date and then to the coffee-house before making it back to Zambia. Tanzania had done me in, financially and physically. Time to say I’m out!