Swaziland, more lush green as far as the eye can see. Hlane National Park was my first spot. Still not sure how I feel about this one. After being in large parks were a fence is seen mainly at the entrance gate it was different. On a map it looks rather substantial in size, next to a major highway. Not an issue. That park, however, is divided into three pens. One for general game, one for endangered species and one for lions. Poaching, was the reason given for the divide. And the only way to see the lions is on a drive. Again, seeing lions is always wonderful. But seeing them next to a fence line, taunted by the animal on the other side, I’m not sure how I feel about that. Nor that you must be driven in to see them. It raises a few questions. When asked how they control the population a generic response was given again not sure how to feel about that either.

The bats in reception were pretty cool as was a German couple I ran into. As hot as it was driving around was wonderful but not as nice as just sitting at the bird hide. Even if the herbivores outnumbered the birds. Also, great spot for a quick siesta.

Off to Mkhaya Game Reserve a couple of days later. Here is when GPS and maps can lead you astray. As far as either is concerned a road with a dry riverbed crossing will take you to the main gate. But in reality the road turns into a path with turns into an impassable thorny bushveld. Right, 300 point turn and let’s try the other sort of road. Nope even thicker even faster. Then a lovely local gentleman runs up to the car and states bluntly, you are lost. Well yes. He laughed, as this is a normal occurrence he tells me. He hops in the car and shows me the way. After a little way I felt bad as he would have to walk all the way back. We managed to figure out the rest of the way for me to go. He said keep going to the tar road and turn left immediately after the railroad. I offered him an ice-cold Coca Cola I had just purchased as a thank you, having nothing else. He gladly took it and began his way back.

Right tar road, check, railroad turning left check, cross the river and up yes a gate. And no! Locked with a sign saying you must have prearranged a pick-up. Um, well ok. Let’s go back to the main road surely there is another way in, this can’t be it, right?

On the way to the locked gate I had passed a nice looking vehicle with obvious tourists parked next to a pseudo brick shack, aka shop. Pulling in right next to them and I asked if they knew how to get in. Lovely Brit family, laughed and said someone is coming to pick them up. Wait pick you up but can’t we drive in? Is this not a self-drive park? Nope. So it goes thusly. You call, they come and get you at one of two appointed times. You then park your vehicle in a secure lot and they drive you into the secure reserve. Unless you are the bakkie and too big then you get to follow into the park and be left at an undisclosed safe location within said park. And a game drive to the camp. I had no idea I was not only not camping, but game drives and food, jackpot! A break from the grilled cheese.

All I knew about Mkhaya is that it is known for Turaco’s and bush babies, neither of which I managed to see. Of course. The drive to the camp was wonderful, birds and white rhino. The camp also boasts a bird hide. So pretty. The rooms have no real walls. They are half walls and only three sides with thatched roofs. Apparently that’s what people visit the camp for. Huh, had no idea. But the scorpions, spiders etc were awesome. The “room” is amazing. Nyala roam throughout the camp as do the crested guinea fowls.

I quickly unloaded the backpack and camera bag I had grabbed from the bakkie as that’s all we could take, also a surprise. And off to the bird hide, even forgot about lunch until one of the lovely ladies came to get me. The staff was beyond kind and thoughtful. Absolutely a gem. I managed to pick up my first round of paper tics. The tics here are not like in North America, no Lyme disease, and these little guys are a pest. Only one had latched on but between the toes. Really. Flip Flops are no match for them. After diligently plucking the bastards off and dousing my feet in deet there were no further issues and good news no tic bite fever either.

The sunset drive was spectacular. Birds and lizards and rhino’s. We had been looking for a Black Rhino but managed to spot White Rhino instead. And had an impromptu Rhino walk. Getting within meters of two lovely Rhinos. One was well-known to the guide. About 10 years ago the reserve had many adult and baby rhino in a boma (pen) getting accustomed to their new home. Poachers being the scum of the earth they are snuck in and opened fire. Fish in a barrel, even the babies, to get the little tiny horns these youngsters had. This was one of the survivors, she has a paralyzed ear.

And shortly there after we came upon Mbeya another of the baby survivors. Only this one was hand raised as her mother was killed and she was far to young to survive on her own. She recognizes our guide and gets all too close. Gives the Landie a nice gentle tap. That horn is massive and she gets within centimeters and I mean centimeters with it to say hello. Visions of impalings flashed briefly. But she was very gentle, curious undoubtedly. As soon as the guide says she’s to close she backs off gently and shows off her youngster and away she goes. Amazing. What a day.

The following morning we have our Black Rhino. And notice the beak the most obvious difference between the two. After breakfast quick drive back to the bakkie and back on the road to a little secret of South Africa, Tembe Elephant Park, hopefully some old Tuskers too. 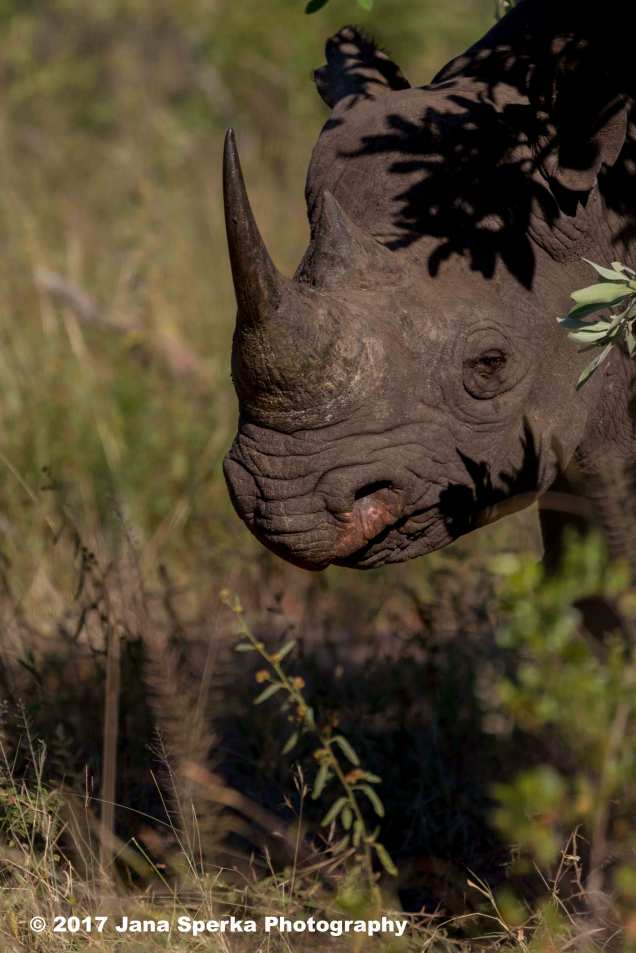 Oh Tembe! One night, alas, in this amazing place. I was in love from the first road sign, Dung Beetles have the right of way. The heat continues but at least now I have a fan. Mkhaya had a gentle breeze to take the edge off and an industrial sized fan. Yay! The food was wonderful too. Again surprised with the game drives. It’s nice not having to drive, watch the road and watch for everything else as well. Gives one the Queen of Sheba feeling, briefly, albeit. And a large Tusker, in addition to the usual suspects and birds. There are not too many of these giants left. A small number here and in Kenya. Tembe or a third of it is only open to humans, the remaining section is uninhabited wildlife preserve. Perfect.

A quick stopover and off to Hluhluwe in the morning. A redo for sure.

Hluhluwe-Umfolozi NP. The weather started to change shortly after arriving. It was hot as ever and as usual I was requesting a map. It’s dual purpose, a map of course and a souvenir. But change was the issue, the gate-keeper had no change or none he was willing to part with and the change I wasn’t willing to part with. A stale-mate. A car drives up to the gate. Idea, perhaps these random strangers will have change. They do, and turns out not strangers. Jude and Mary were at Tembe as well. Change in hand, map was doled out. Free ones were given at the campsite, d’oh! It happens. But as luck shall have it the change fiasco was needed for Jude, Mary and I’s run in. They were not able to get to the camp as the gate keeper was making a rather large fuss about the lack of water and number control etc. Something wasn’t quite right with that. Mary had the number for the campsite and once a whiff of cell reception was obtained I called the front desk. Sure they can come up, not a problem. Interesting. The gate keeper was less than impressed and more papers had to be printed etc etc. Oh the little papers. Anyway off we went. Slow climb to the hilltop abode. A quick sunset drive, dinner and plans to self drive as a group in the morning. Thank you Jude for being the driver. It was wonderful to be a passenger. The rains came and the rivers swelled and easy crossings became hard stops. Rightfully so, you may cross one but if the rain started again you’d be stuck. We had a wonderful day full of birds. Started with Trumpeter Hornbills, on mass flying overhead and calling like mad. A couple grooming each other. Well it was Valentine’s Day so I guess the birds were in on it. My over enthusiasm for birds was happily accepted by the lovely UK ladies, cousins in fact. It was a wonderful day. Buffalo, warthogs, rhino’s just a plethora of animals. But no spotted dangly legs for Jude. Maybe in the morning. We had lions on the sunset drive but no leopard.

The sky cleared the next morning as we ventured forth. A quick morning self drive before returning to pack things up and head south. I was back in Springbok and the ladies in their vehicle. We continued into the middle of the park were it turns into Umfolozi, I would exit and Mary and Jude would explore the southern regions. Mammals were abundant in the morning hoping they saw those spotted dangly legs. Alas, the last thing seen before I exited the park was a stark reminder of man’s greed. Rhino poach in the distance. This I will never understand. And a sad end to a wonderful two days. Mary and Jude thank you again for a being utterly kind and humouring my birding and for wonderful two days. Safe travels.

Durban for a quick stop and off to the Southern Drakensberg and Lake Naverone.