Durban, well Durban was an experience. Granted it was on the ocean, a toe did go in, but the location could have been better. Not the best neighbourhood and the bakkie was too tall, with the roof top tent, for all the secure parking lots.

Ended up paying a kid on the street to watch Springbok all night, empty of all visible contents of course. He may have been a pimp, honestly not sure. But between him and the “ladies” Springbok made it through the night. The searing heat and lack of functional AC made my night far worse than his (Springbok, not the pimp). Have you ever stayed at a place where you slept on top of the covers with your clothes on? Needless to say we bolted at first crack of dawn for the refuge of the Southern Drakensberg.

Scenic drive through the escarpment with green everywhere. Made me think of home and the Rockies. Undulating and curvy country side roads. Just what was needed after Durban.

And what would make this spectacular view even better….cheese. A Cheesery in Underberg. Should have had food prior to walking in. After purchasing my weight in cheese and probably some of the best biltong I have had to date I made it to Lake Naverone. Beautiful cottages nestled in the Mountains around a large lake. And with characters like Rohan and his wife Charmaine (hope I spelt that right) to keep you entertained the next couple days would be marvelous.

I finished unpacking and hung laundry to dry. All the things prior to a nice walk. Next was the camera. As I picked up the beast I heard and felt glass pieces. Shattered glass and a lens should never be heard at the same time. My heart sank. How is it possible? It has its own case, I’m extra careful. Must have been during the unpacking of Springbok in Durban. Darn Durban….well let’s see how bad this is. Thank you camera gods it’s just the UV filter. Somehow the lens cap and the UV filter became jammed, thus shattering the filter. The lens beneath without a scratch. Dance of joy commence!

A nice walk around the lake to stretch the legs is always wonderful. Maybe a paddle boat or some fishing….who knows what the days will bring. 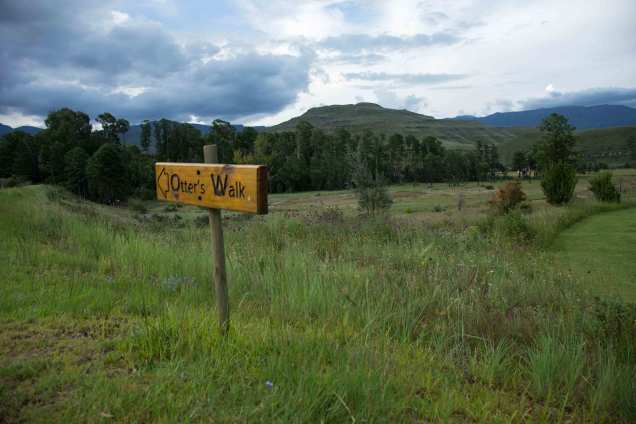 The following day, Sanipass. Will not self-drive this one, mainly it’s too pretty and demanding. So either watch the road or the scenery  but the two are hard to do simultaneously on this pass. Time to play tourist. Sanipass into Lesotho, even if it is just passed the border crossing. It’s one more stamp in a full passport. Another place to explore further at a later date.

With every tight turn during the ascent I became happier with the choice to be driven. Plus all the lovely stops along the way. The scenery really is breath-taking, a veritable feast for the eyes whichever way to look.

Once up top, a brief local village tour to meet with Basotho people who speak Sesotho. Yup, the people of Lesotho are called Basotho and speak Sesotho, say that three times fast. Fresh homemade bread and crafts and a brief language lesson before lunch.

Time for lunch in Africa’s highest pub before the descent back down to RSA.

And of course the birds, Cape Vultures and the Southern Bald-Ibis atop the mountain pass between mouthfuls of local stew.

The way up we were stopped by crews as active blasting would be taking place. Again glad I wasn’t driving I would not have known. So, we took our time going down to ensure the blasting was not only done but the rocky bits cleared. And of course spot an animal or two.

Sanipass was wonderful and the next day it was time to get physical. The plan was to hike to the Three Pools and maybe even to the Bushman Paintings. If we are feeling particularly spry Rhino’s Horn.

Beautiful morning for a hike. Slowly meander the way to the pools. Marshy grasslands from all the recent rains but endless green fields with the Drakensberg as a back drop. Slow going with frequent photo stops. Finally the pools. Feeling good, let’s clamour up the wedge and find those Bush paintings.

Nope! Camel bag sprung a leak. Again. It leaked prior to my departure all over the cushion. Gorilla taped the heck out of it but it sprung another leak in the office while talking with Rohan and Charmaine. So wrapped in plastic back in the pouch in the backpack. This time it found its way to the camera equipment. Although individual enclosed in their own casings the water found its way in. I couldn’t have leaked when I was at the bottom of the hill climb that would have been convenient.

At this point the lens and camera were not wet, a little damp but not wet, thankfully. I decided to climb back down, as not to push my luck. Sat next to one of the pools and sun-dried the equipment and had a wee picnic. Went for a brief, ice-cold dip and dried off in the blistering sun. Departing I kept wondering if I should just given it a go. Yes, the Camel bag had leaked 3 times, but surely now that it’s strapped to the outside I’d be fine. I may get wet but I’d dry. Humming and hawing, brain vs. gut, nope we shall slowly meander our way back. The best decision of the day. As I reached the dirt road the skies darkened and the thunder rumbled and chased after me all the way back to the office. Granted the deluge didn’t spring forth until sometime later but I’d have been stuck up the hill with no cover, nor water proof anything for the gear. Best choice.

Poor choice, however, was to forget to put sunscreen lotion on my calves. Didn’t think those puppies would see that much sun in the tall grass. Now they resembled cherry tomatoes. Lesson learned. Nothing is safe from the sun. 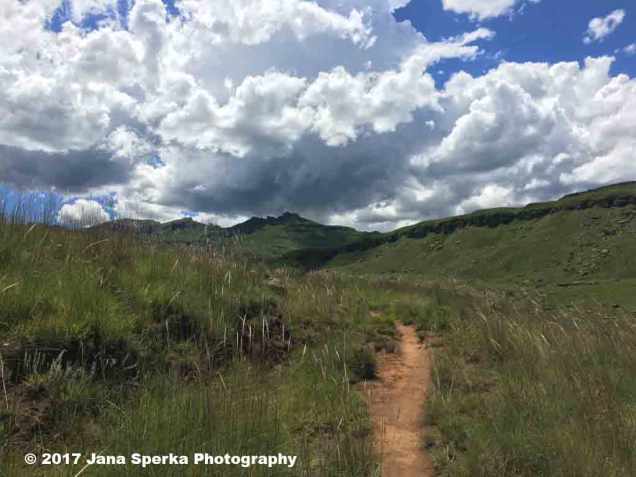 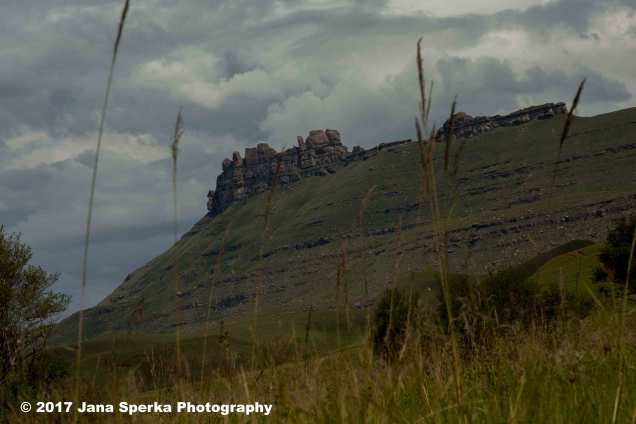 Lake Naverone and the Drakensberg did not fail to impress. The majestic escarpment midst the lush green grasses. Fabulous. Next, Coffee Bay, a long drive into the Wild Coast. Other guests having come up that way, weighed in on the drive on the Transkei. Not the best place to go at the moment. Detour needed. Scenic route through the mountains to Queenstown. A small town not to far from Addo, my next destination. Completely forgetting that a good number of the Biker Dozen resides in Queenstown.

Luckily, Mac, social media savvy, quickly facebooked me and we would have a mini reunion. Late afternoon arrival into Queenstown to meet Mac and his wonderful wife Dot. The puppies as well. After greetings, Mac swung by the airfield to give me a bird’s-eye view of Queenstown in this LSA (Light-Sport Aircraft). What a view, and gave me some ideas for the future. Can you imagine doing this trip from the air, how spectacular would that be? Plotting and scheming…..

After the fly over we stopped at the local pub to have a mini reunion with some of the Biker Dozen. Mac of course, Peter, Mark and JT. JT had already left when I met the boys in Botswana. What a good group of guys. So glad I had the opportunity to see them again. And apparently a certain purple shirt picture made the presentation, lol! Thank you again Mac and Dot for your warm welcome and all your kindness.

Mac had mapped out scenic routes through passes for me and my upcoming drives. Addo Elephant Park was next.

Addo was wonderful, overcast mornings, hot days and cool nights. Perfect for camping. As it is an Elephant Park Dung Beetles will have the right of way. But the Shongololo’s, well they took over some roads. There was no way to pass without running some of the millipedes over. Waiting them out didn’t work as they kept coming. At least the birds would be well fed.

You can also walk freely through out the camp at Addo. They have a nice trail walk which is the perfect opportunity to stalk sunbirds. Really get close to nature outside the comfort of the vehicle. A nice change.

From Addo, thanks to Mac’s suggestions I headed to Prince Alfred Pass and a quick-lunch stop at Angie’s G Spot restaurant (G stands for great) and I even met Angie. I was to continue on Scenic Route 62 to Ron’s Sex shop restaurant before making my way across to the ferry to Malgas, just outside De Hoop. Time got away from me and had to ditch Ron’s and the second half of the scenic route, sadly, but glad I did as I just made the ferry. Man powered ferry that stops at 5:30, I showed up at 5. Close one.

De Hoop, the original plan was to be there for the flower explosion like Namaqualand, a must see. But as deportation put a wrench in the plan, the bloom was long over. But the park is along the ocean with beautiful white dunes. More Blesbok and Hartmann’s Zebra. 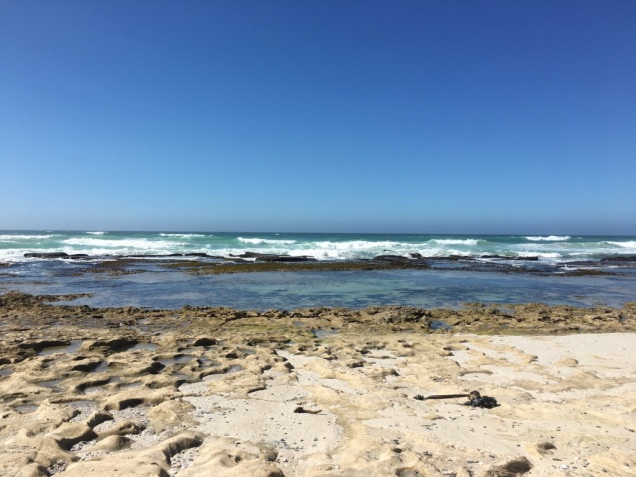 From De Hoop a short drive to Agulhas and the Southern Most Point of Africa. It wasn’t until I read the sign that it dawned on me. I have driven from Cape Town to north of the equator and back down to the southern most point of the continent 60,000+ KM. What a journey it has been. And Agulhas is beyond. I have stayed in many Sanparks camps but these Chalets were epic.

I had just unloaded some much-needed groceries and sat down on the deck when the birds just started coming. How was I to get anything done with the bird show on my porch?

I woke the next morning to a Sunbird chorus. This lovely little guy decided to sing me awake, through the cup of coffee and the morning meeting.

Eventually the Sunbird flew and energy restored a beach walk was in order. Just a quick jaunt to get the lay of the land for the days activities.

A fantastic couple days spent on the beach. Now for a long drive to the Kgalagadi via Namaqualand followed by the Karoo before finishing the journey where it started. Coming full circle back to Cape Town.